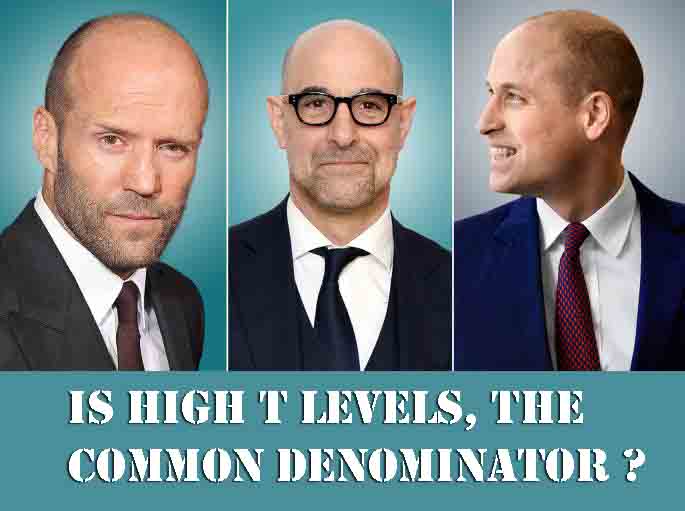 It’s common among women to know a man’s virility from his baldness levels. And somehow this idea is gaining so much traction into men’s thoughts.

The connection originates from this theory of having an extra load of testosterone that led to hair loss, and of course, the magical T is well known for its power in men’s libido, masculinity, and power. (1)

However, that not directly the case and the truth will be quite interesting for you to know. We backed our finding with actual studies and not same BS found all over blogs. I personally was shocked about how BS became facts without evidence.

In this Research I’ll cover;

DHT Sucks, But T was Blamed For This

The main regulators of human hair follicles are androgens, sex steroid hormones which stimulate hair growth in both sexes.

The primary and most well-known androgen is testosterone and second most commonly known is dihydrotestosterone (DHT). (2)

The process still isn’t fully understood, but it involves an enzyme that converts testosterone into a substance called dihydrotesterone.

Some people experience hair follicle shrinkage, due to low supply of nutrients and blood flow. While the shrinking takes place, the growth cycle span becomes shorter. (3)

Eventually, the follicle becomes dormant and no more hair is produced.

this article through pubmed, which attributes increased DHT levels with creatine use:

CASE STUDY: A new study published in JAMA Dermatology looks at the possible relationship between hair loss and testosterone levels.

The conclusion of the Study;

It measured the serum concentration of Testosterone hormone and hair loss in men from the general population of Northeast Germany reports that there is no observable link.

There are Six main causes of male hair falling out:

Many studies have shown that males who lose their hair and those who do not have approximately the same testosterone levels. The difference is in the sensitivity of their hair follicles to hormonal influences.

A study from the University of Bonn in Germany from 2005 confirmed this and added fuel to the mother’s father. (4)

The conclusion of study; The hereditary factor is more dominant on the mother’s side. If your dad has a full head of hair but your mom’s brother is a 5 on the Norwood Scale at age 35, chances are you will follow your uncle’s or your mom’s dad journey through baldness.

#2 – When weightlifting or bodybuilding increase your hair loss

A bodybuilder has a lot of hormonal fluctuations from their weight training and their dietary intake.

Eating is one of the most anabolic things you can do. It can modulate hormones including DHT. So if it’s a food supplement we’re talking about here, it can definitely cause changes in hormones, including DHT.

The effect may be small, but to someone already prone to hair loss, it may be cosmetically significant.

Firstly, male pattern baldness is not necessarily about how many hairs you shed each day (so don’t go counting them) it’s more about how quickly you are replacing them.

If not quick replacement, then definitely, that’s a warning sign.

One of the first signs may be an itchy scalp. This can be caused by a build-up of sebum on the scalp and is often a precursor to dandruff and hair loss.

If the hairs at the base of your fringe are thinning, or being shed without being replaced, you might be suffering from Androgenic Alopecia.

From there, the hair is lost from the crown of the head, leaving a distinctive bald pate,

Yes, this is possible. Low testosterone and hair loss are correlated.

However, it mostly concerns “male” hair, such as beard, hair on chest, back, legs, arms, etc.

Nevertheless, this is not the most terrible thing about low testosterone levels.

Low level of this hormone can lead to other more serious problems, such as fatigue, depression, muscle loss, fat accumulation in the chest area, weight gain, decreased libido and even erectile dysfunction. (6)

You have to understand that, having a T-booster will not initiate any kind of hair loss. However, you need to verify what kind of T-booster you are consuming.

Over 80% of testosterone boosters on the market are garbage and the ingredients are low quality.

I have shed some lights on this t-booster on the following research; What Does Testosterone Pills Do?

I can summarize this research by this German study;

A cross-sectional population study conducted in Northeastern Germany examined 373 men from the general population who had not received prescribed drugs in the past 7 days.

Blood sampled were taken from each participant and a panel of liquid chromatography-mass spectrometry measurements were conducted and analyzed to determine the serum concentration of sex hormones.

In addition, dermatologist examined each participant and assessed general hair loss (yes or no).

The analysis revealed no significant relationship between general hair loss and testosterone levels in men from the general population.

When men with and without general hair loss were compared, there was no observable difference in androgen concentrations. With regards to androgenic alopecia and premature balding, these findings were consistent with previous studies that consisted of smaller sample sizes and selected participants.

Although higher levels of testosterone are suggested to increase the level of DHT, which in turn stimulates androgen action on hair follicles characteristic of male pattern baldness, this study observed no link between hair loss and testosterone levels.