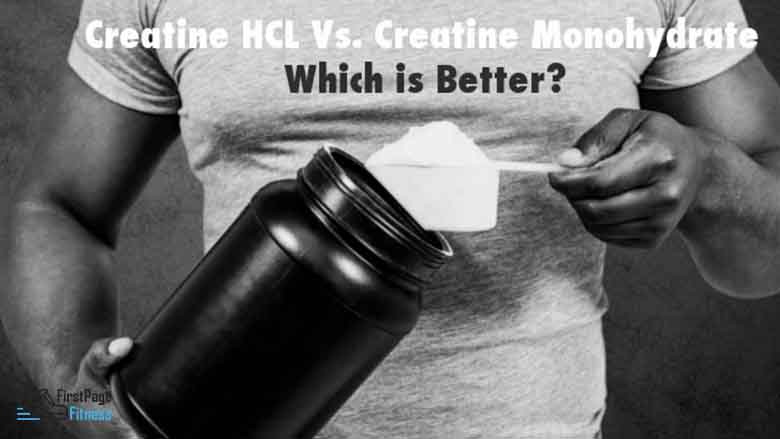 Most studies are heavily supporting Creatine Monohydrate over Creatine HCL. The components of the analysis were focused on performance, muscle growth and stamina.

When it comes to bodybuilding you have to make sure that each supplement you pursue is worth your hard earned money.

So far, Creatine & Whey Protein proven to be the best supplements on the market that are actually proven to work & must-have supplements (1).

Supplementing with Creatine makes a noticeable difference in the way you workout. You’ll break your limits easily (2).

Once your natural creatine stores in your muscles gets fueled up, it automatically turns to energy during intense workouts or weight lifting (3).

Many argue that Creatine’s downside is pulling water in muscles and making you fatter. But that’s just temporary you might witness weight gain in the first week (2 to 3 lbs) after that it will normalize (4).

However, the idea behind retaining water in muscles is because this helps to enhance synthesis of skeletal muscles. You’ll also experience delayed fatigue and quicker muscle recovery from HIIT.

Bonus Read: Here is my experience with using 100% Creatine Monohydrate and my conclusion.

Now all of those facts are heavily proven with Creatine Monohydrate, but what about Creatine HCL?

Creatine HCL was designed for one and only reason; To dissolve faster in water.

However, in order to do this, they had to molecularly bind it with Hydrochloric acid (5).

This modification did help in high solubility & absorption rates. Thus, it will break down faster than Creatine Monohydrate (6).

But here is why you should not really care about that:

5 Reasons Why Creatine Monohydrate is Better Than Creatine HCL

1- Zero Research vs Tons of Research

There is no scientific evidence behind Creatine HCL and it’s impact on muscle absorption rate, and long term benefits and side-effects.

Actually, after changing its molecular structure, all that is known is high solubility and that’s it.

I’m not sure why Creatine HCL was promoted high absorption rate as something great. The reality is it’s not!

When you consume creatine, most of the portion is send to plasma, rest sent to muscle or excreted. The more creatine in plasma doesn’t mean there is more in muscle cells.

The sad part about Creatine HCL is that with high absorption rate most of it goes to plasma and less goes to muscle tissue. Thus, it’s less effective than Creatine Monohydrate.

I’m not sure why the price tag on Creatine HCL is higher. Perhaps it’s the hype that making it pricy. The average cost of Creatine Monohydate is around $35 for 500 grams, you can even get it cheaper with Battle Fuel Ready Creatine at $29.99 with free shipping.

If you compare to Creatine HCL, most price tags go $40+

You can feel safe with Creatine Monohydrate because tons of studies suggest that long term usage has zero side-effects and it’s actually encouraged if you are serious about building a great physique.

This one is more or less a no contest as more than one study has revealed creatine monohydrate is safe and fine for people without pre-existing medical concerns. Its safety has also been proven in the longer term, which is good to know if you’re a repeat user of creatine supplements.

The ‘no contest’ has to rule as the same research doesn’t exist for creatine HCL. So if you want the reassurance of a proven, tested product, creatine monohydrate is the one for you. Monohydrate is also considered the purest form of creatine available.

At first glance, you may think that creatine HCL is the winner since such a smaller dose is required. However, it’s all pure marketing. And more marketing doesn’t mean more effectiveness.

So what does that mean to you?

I have recently tried Battle Ready Fuel Creatine Monohydrate and I have written my conclusion in details & its exact effect.

Hope I covered all the info you are looking for. Keep hustling!