If you are in the cutting cycle and need something to boost you up. You will be given Winstrol Vs Anavar as the best to suit your enhancement needs.

Anavar and Winstrol are two similar steroids that are often compared due to their popularity during cutting phases.

Both have amazing anabolic properties, improve the overall performance and get you ripped.

Thus, there is a debate among which is better, and which give faster results.

Although, the king of all cutting would be Clenbuterol, as it’s no’1 due to its powerful way of the mechanism of action.

Some bodybuilders prefer to go for Anavar & Winstrol. Some even stack both of them together. There are lots of interesting body-hacks you will discover here in this article.

If you are uncertain which substance to choose for your needs, I’m sure after finishing reading this, you’ll be definitely sure what to get and for how long.

Similarity & Differences Between Winstrol and Anavar

Let’s start with Anavar and what it can do

Boosts nitrogen retention, this is vital in faster recovery. What is more important is, when your body retains nitrogen, it retains more stamina. This will make your workouts last longer and harder.

Long-term fat loss, in a study they examined individuals after stop usage of Anavar and found out that subjects maintained a lower overall % of body fat for 12 weeks.(1)

The major reason behind the demand of Winstrol is because it never converts to estrogen, unlike other steroidal substances.

Thus, it is likely to be used in Cutting phase, because it will never have the common side-effects of steroids, which is Gynecomastia. Many claim it even prevents man boobs from happening when stacked with other steroids.(2)

It also increases vascularity (the size of your blood vessels), so that effect might make it look like you are more ripped.(3)

There’s no evidence that it actually does anything to decrease your body fat, except that it allows you to work harder and keep your motivation up.

Like Anavar, it enhances your protein synthesis. This increases muscle development and tissue repair. If this process is augmented, the body will then be able to renew itself quickly after an illness. Apart from that, lean tissue can grow fast.(4)

The Common Ground for Anavar Vs Winstrol Would be The Following;

Despite that both (Anavar & Winstrol) have similar mechanisms, they can have strength and weak points if used in certain goals.

Should You Go For Anavar & Winstrol Stack?

Honestly, it’s quite rare to find a bodybuilding professional using Winstrol on its own. It is usually stacked with other substances.

The reason because of its ability to act synergistically with other steroids. There are certain substances that are common to be stacked together. Anavar & Winstrol are usually one of them.

When it comes to serious cutting phase. It is better to put the two drugs together for synergistic properties. (5)

For maximum cutting results, I would recommend going for Crazbulk cutting stack which is designed for hardcore fat burning while maintaining muscle mass.

When to Use This Cutting Stack?

After bulking up and gaining the desired amount of muscle mass and would like to accentuate it and make it look harder. You will want to hit a cutting cycle.

The purpose of this stack is to aid in fat loss and get rid of retained water in your body during the bulking cycle.

This is where a Crazy Bulk Cutting Stack comes to action. It will shred your fats in the entire duration of the cutting cycle.

How To Use This Anavar Winstrol Cutting Stack?

This legal version of Winstrol & Anavar is meant to be taken orally with meals.

You should take the tablets 30 minutes before starting your workout. These compounds are strong and you will feel the synergy during your exercise & lifting.

You will need to comply with Crazbulk Cutting cycle, which is 8 weeks on cycle, then 1.5 weeks off cycle.

On top of that, observing your calorie intake is vital. Eventually, you need to achieve a calorie deficit to see optimal results.

If you Decided to Take Anavar Vs Winstrol, Solo

Honestly, whether you decide to use Anavar or Winstrol. You will get the benefits that will aid in your cutting cycle.

Both are winners in the cutting game. & Pricing is very similar.

I had to get a deeper perspective on users who decided to use both of the substances solo to test its impact on their vascularity, performance level, lean muscle growth & fat burning.

Vascularity: the veins in forearms, biceps, and delts are very prominent with Anavar. Winstrol doesn’t deliver the same results.

Performance levels: Anavar stimulates the formation of phosphocreatine, a body compound that can replenish ATP (adenosine tri-phosphate) , the main energy currency of the living organism. You will feel an intense short-term boost in the anaerobic performance, it is needed in weightlifting and sprinting.

This comes with a downside as Anavar is a low androgenic compound unlike Winstrol. Thus, Winstrol does deliver the same results but with more half-life.

Fat Burning: Both substances are a tie in this. As they don’t directly influence fat cells or stimulate metabolism. But they will enhance muscle mass growth, which leads to a rise in the metabolic rate and fat loss. Results start to kick in the first week of usage.

Anavar and Winstrol Side Effect

It is vital to be aware of the expected side-effects of each substance. I have to mention that when opting for the Crazy bulk Version. You will not deal with such effects. And It’s highly advised against overdosing.

Stating these adverse effects doesn’t mean it will happen the moment you go on Anavar or Winstrol. It’s all about the dosing, quality of the product, & your body’s reaction.

Once you decide using Anavar or Winstrol, it better to know the source. I’m sure that it ain’t easy to get your hands on both steroids. First of all, it’s illegal to buy online. Second, it can be damn expensive in a black market (plus you will have to trust the supplier on what’s in the bottle).

The idea behind legal steroids which was initially introduced by Crazybulk brand. They managed to reformulate some of the ingreidents to mimic every single aspects of actual steroids.

What are Legal Steroids?

Legal steroids are becoming the most suitable way to get your hands on products that will provide the same benefits as the actual illegal steroids.

To Sum It Up

Both Anavar & Winstrol are a powerful combination for cutting cycle. Explosive results are guaranteed without side-effects if you stick to the dosage suggested. 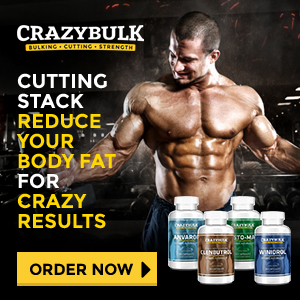 It’s vital to do budget planning and find the most cost-effective stack that will deliver your desired results.

I do recommend to check these offers below.